Let the Hard Times Roll (or Not)

Locust Nine is out, featuring a poem from me. There's a poem translated from Chinese as well. That's interesting! My poem, "Hard Times Cafe," is about an establishment that used to exist in Clarendon, Arlington. It served chili but I mostly went there for its happy hour specials. One night, I was there with a friend during a rain storm and we watched Arlington's attempt at Mardi Gras pass on by. It became the genesis of the poem you're about to (or already have) read.
Posted by Ben Nardolilli at 5:41 AM No comments: 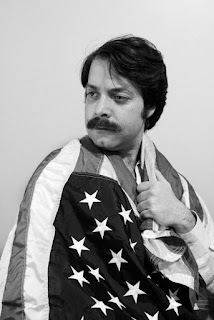 I have a mustache. I don't hide it, I keep it out in the open. When one has a mustache, one has little choice. From time to time the mustache gets some company in the form of a beard. Usually though, it sits all alone on my upper lip. It's a conversation starter, of sorts. Lately I've been noticing differences in how people talk to me about my follicle creation. For instance, Men like to preface any kind of mustache-related conversation by asking me how long it took me to grow it. Women, as a whole, seem less interested. I suppose men who are in awe of the mustache want to know what kind of effort is need, how patient they have to be. Many of them will admit they wish they had the chops to grow what I have. Perhaps it's one of the few jealousies I inspire in anyone.

For women, it's different. there's little interest in knowing the time it took to grow my whiskers. That's fine, sense I'm not really sure myself. I grew a beard in 2007 and shaved it all off on Halloween, save for the mustache. Philosophically speaking, one could make the argument I never grew a mustache at all, I only grew a beard. This would ignore the original definition of a beard. A person can grow one without have a mustache. Abraham Lincoln is probably the best example of this. These days, it's implied though, that to have a beard means having a mustache. Neckbeards are the exception keeping facial hair originalism alive, I guess.

Women tend to make reference to someone else with a mustache, usually a figure from pop culture. There was a point where a lot of the comparisons involved Ron Burgundy. Inevitably, the specter of 1970s porn stars came up. I never got a Tom Selleck reference, but I used to glean allusions to Daniel Plainview or Bill the Butcher. Around the 2010s, Ron Swanson from Parks and Rec took over and for several years after I couldn't go out to a bar or a party without someone (most of the time, a woman) comparing me to him. I took it in stride, since he's generally considered a fine character on the show, our political disagreements notwithstanding.

So I'd make a reference to Duke Silver, or eating all the bacon and eggs, and that would please people. After Parks and Rec went off the air, mentions of Ron Swanson dropped off. It made sense, he was no longer on television. Thankfully, nobody called me John Bolton, who probably sets his mustache using the blood of dead Iraqis. Or former Trump attorney Ty Cobb . In fact, people generally left me and my mustache alone through most of 2015 to 2017. It was able to exist on its own terms, without inviting a comparison to another famous mustache.

However, that's changed. In the past couple of weeks, I've been getting Ron Swanson references all over again. It's weird and it took me a while to figure out what was going on. Why now? Of all times, would he be making some sort of comeback? Then it hit me. The current political climate (which has also been hitting a lot of people literally lately) explains it. People, especially young women, are binge watching Parks and Rec the way Liberals watched The West Wing during the Bush years. It's a coping mechanism, especially since Leslie Knope and Hilary Clinton are spiritually linked as characters (and Amy Poehler has played both).

Inevitably, watching Parks and Rec for Leslie Knope means seeing a lot of Ron Swanson. Seeing him, makes one think of his mustache. Then seeing me, makes him the easiest reference point. I guess going forward, I can judge the state of the country and its level of despair by how many references I get to Ron. The fewer, the better. Maybe in some far off glorious day, I will be getting compared to Randy Bryce instead of Ron.

Posted by Ben Nardolilli at 9:32 AM No comments:

A new poem of mine is up at Plum Tree Tavern. It's run by Russell Streur, formerly of The Camel Saloon. It's named after a creek in Arlington. Read it, meditate on it, and drink to it.
Posted by Ben Nardolilli at 5:51 PM No comments:


Posted by Ben Nardolilli at 5:44 AM No comments: