Well, sad news. Perhaps tasty news in a sense, but mostly sad. Sad not in the sense that I am crying or losing sleeping, but maybe more just a little disappointed. I found out on Christmas Eve (that's December 24th for all you ultra-secularists out there and Jews)that Harry the Pig, pet pig for my Aunt Chris out in Kansas City, passed away.

I assume it was a peaceful death. She has dogs but they were not responsible. No autopsy has been performed though, so the possibility of being poisoned will never be solved. Of course who would want to poison such an adorable creature? 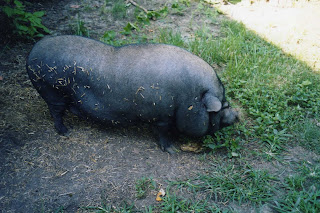 He was a pot-bellied Vietnamese pig who legend has it, came from the foothills of the Mekong, or a whorehouse in Saigon, who wanting a better life, traveled on a rickety boat first to Malaysia, then Australia, then back to Vietnam, and then finally, to Kansas, where my cousin Trey found him and soon he became an almost accepted member of the Hornbeck clan. That's no optical illusion (or allusion) you are seeing. He really was that front heavy, looking like a tube of toothpaste that had been squeezed too much on one end. He lived off dog food and dog treats, and was known for his biting prowess (ask my sister Anne.) He was the highlight of our vacations out west, often pausing beneath the trampoline my cousins owned while we jumped up and down and landed on his hairy back.

Now I've been home, and bored, and so have decided to re-imagine Harry. I have dubbed him a pig of mystery, capable of assuming many different identities and disguises. A post-Modern pig, as it were. Yesterday I began trying to turn him into Napoleon from Animal Farm. I gave him a moustache, monocle, goatee, and bowler hat, but that left the rest of his sausage shaped body unadorned. For some reason I made him into a Nazi pig. I guess I figured that it would be natural for a pig to be an anti-Semite. 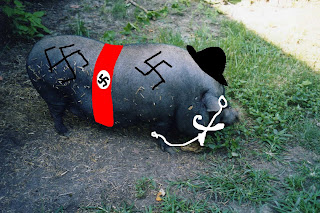 I felt sorry for Harry, and decided instead that he should be imagined as a tough sort of creature. He was always able to keep up with the dogs and never let any of us kids tell him what to do. He was always in control, sitting (or sleeping) mighty in the little house that the Hornbecks let him use. So, I decided to make him a punk pig. 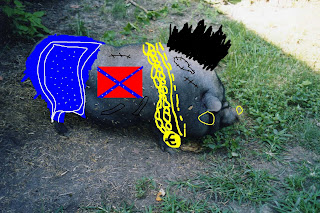 I admit I started out trying to make him like Mr. T. I guess I ended up turning him into a white trash punk. This is not to downplay the more delicate and beautiful elements of Harry the pig, who was known to be quite stylish and dainty at times. This was a picture I recreated from memory of one occasion I saw him getting ready for the big pig ball, where he would meet his own prince charming. 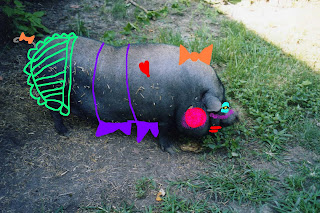 Still, I had to revel in Harry's ancestry, his roots, his political leanings. It was wrong to forget where he came from, where his bloodlines began. I actually wrote about him to the government of the People's Republic of Vietnam, and they dug through their files and we both learned that Henry was used as a VC base during the war with America. This could have potentially caused Harry to end up in jail, or worse, bacon, ham, and sausage. But luckily for him this picture was never shown to anyone, including my aunt and uncle, in the states: 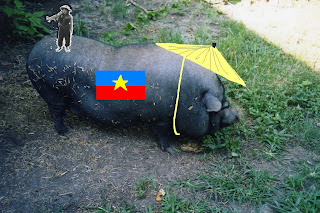 Well it has been a while since this blog has been updated, and I shall remedy this situation. Expect more groundbreaking essays and critical work, humour examinations of daily life, and possibly a poem or two. The big project this winter break will be to finish my novel Three Days in September, teach myself Italian again, evaluate poems for the undergrad journal West 10th Street, and continue submitting things for literary magazines. Check out a poem a wrote for Cerulean Rain's first upcoming issue.
Posted by B. Ellis at 2:14 PM 1 comment: