Readers of this blog might wonder if I do anything other than write poetry all day and send it off to places. Well, if you've been reading my other blog, you know that I've been braving the Internet to find myself work, up against limited opportunities and treacherous scammers. But let it be known, that I do have interests other than poetry and writing. One of these is music, not writing or performing it, just listening to it. A couple of months ago I wrote about my attempt to listen to the 1,001 albums considered by some to be the definitive listening experience before one dies. Now that I've finished that project, I listen mostly to Pandora. For those of you who don't know, Pandora is an internet radio station that uses the music genome project to match a listener up with songs they would like based on what they have previously enjoyed. Most of the time it works well. Rather than finding music at random or playing what is popular, Pandora guides me through songs that are selected just for me. Through it I've discovered John Fahey, Starfucker,  Charlie Poole, and Royksopp, among others. However, the system isn't perfect. I spend a lot of my Pandora time listening to funk and I think I may have exhausted the system's capabilities. Either that, or some weird reverse Affirmative Action is taking place. Interspersed between songs by Parliament and Funkadelic is music by Hall & Oates or Steely Dan.

The main issue with the system though, are the ads. Now, I understand there is no such thing as a free lunch and Pandora has to support itself somehow. However, if a company is trying to support itself with ads, I think it should be concerned with which stations are playing what. While the music is personalized, there does not seem to be any concern with finding out the right demographic that would actually use the particular good or service being offered. If Pandora is going to grow and bring in more revenue, it is going to have to target better. That won't solve the quality of the ads, but what can you do? Radio advertising is always terrible. Without access to images or much of the listener's time, advertisers on the radio have to hook a person's attention quickly, often by means of a jingle that worms itself into the brain. The effect is like being backstage and listening in to the shittiest vaudeville acts you can find.

Nevertheless, from pandora's point of view, the targeting is more important.  While there are people who have a variety of musical tastes and have patterns of consumption that are hard to track (i.e. me), most people's spending habits and musical tastes can be correlated one way or another. Instead, Pandora sends out ads indiscriminately in hopes of hitting someone who might buy something. It is the same strategy used by cicadas when they emerge after years in the ground as a huge brood of slow flying meals for other animals. Sometimes that ads aren't simply misplaced, they seem to run counter to what the fan base of a given artist is probably like.

Now maybe I am just unfairly going into stereotypes. But I would like to think that the fans of eccentric American guitarist John Fahey are not on the lookout for a body spray that will make them smell just like Carmelo Anthony. Nor do I think the marines will find new recruits by playing ads in between songs by Joanna Newsom. I could be wrong though. But there are some ads that are plainly misplaced. At one point, I kept getting commercials for a service that would offer me deals on all the best places to dine, shop, and visit in Boston. I can't imagine why a company would pay for such advertising that would be broadcast to the rest of the country. Maybe it was planted by the FBI and it was a way to entice Whitey Bulger out of hiding by getting him to come back to Boston for a good deal.

Then there are the iced tea ads for Turkey Hill Iced Tea that come on my funk station. Of course, there is nothing unfunky about iced tea, but the voice of the man they use is irritating and creepy. When he says the word "cold" he drags it such a way that instead of feeling refreshing, it reminds one of Siberia and gulags.
Posted by Ben Nardolilli at 8:51 AM No comments:

A wonderful little video made for one of the poems in my collection, Common Symptoms of an Enduring Chill Explained. Watch the video, pup up its number of views, and then buy the collection here.

Posted by Ben Nardolilli at 6:56 AM No comments:

Touch Me in Touch Poetry

Three poems of mine are up in Touch Poetry magazine. Go ahead and check them out. They are right in the front of the magazine. Read about urban experiences involving the Chinatown bus, New Jersey, pollution, and people passing out information on street corners. ﻿
Posted by Ben Nardolilli at 11:47 AM 1 comment: 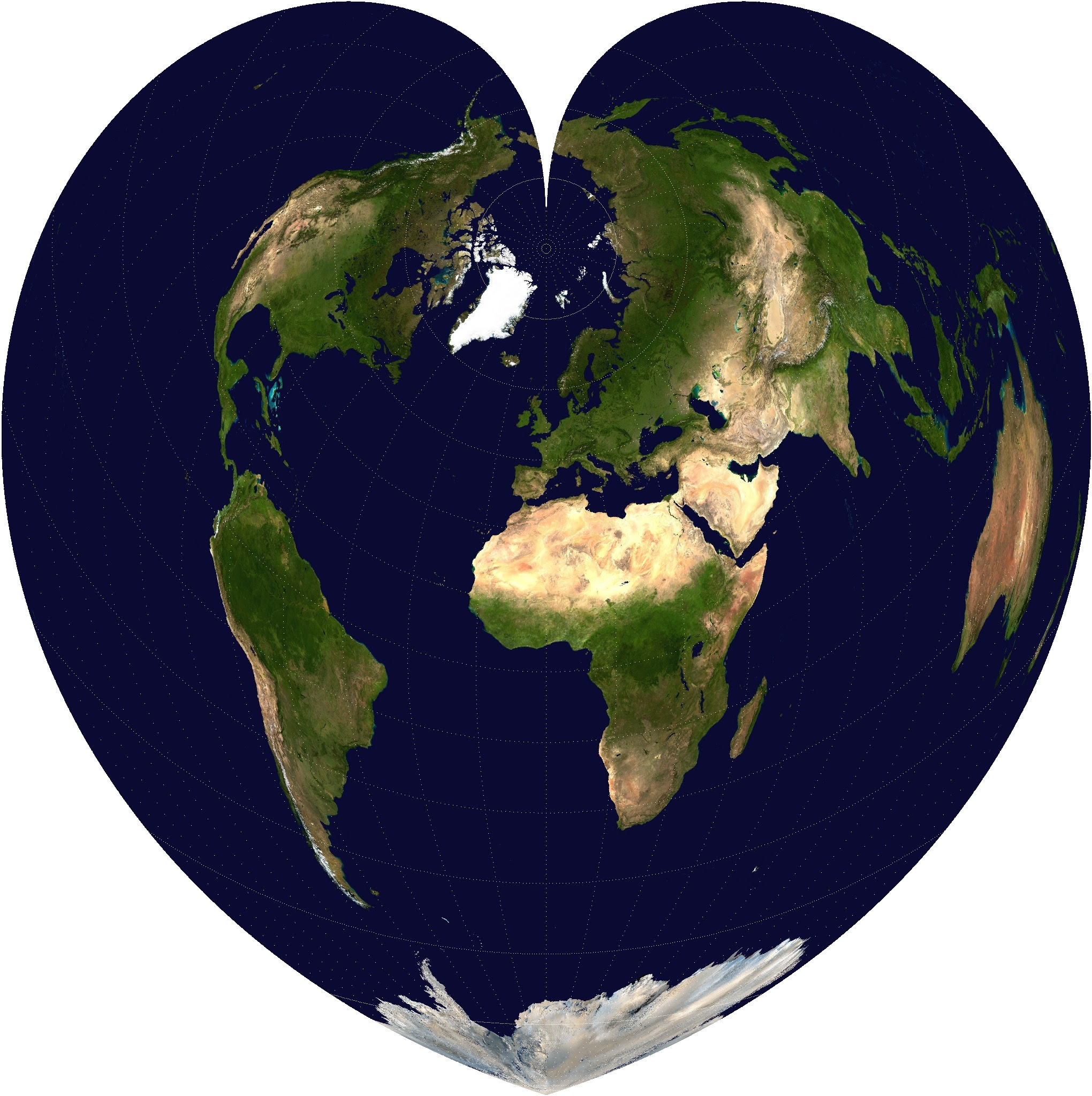 ...or as the spellchecker wants to call her: Josie Asocial Plumes. This blogpost is dedicated to her. Also, I have a poem up at Dr. Hurley's Snake Oil Cure. It is titled "A Werner Projection," and is based on the type of map pictured above, probably the sexiest projection there is right after Buckminster Fuller's Dymaxion.
Posted by Ben Nardolilli at 11:19 AM No comments:

A Defense of Manischewitz Wine 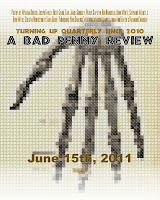 A new poem of mine is up at A Bad Penny Review. For all of you who like the sweet stuff and don't sweat it when other people make fun of you for it, here is the verse you've been waiting for. Bonus points and the tip of my glass if you can identify the source of the quote at the top.
Posted by Ben Nardolilli at 6:49 AM No comments:

I have now returned back to Arlington, Virginia from Italy. It was an interesting experience. 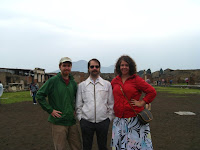 We got into the mood as you can see and really absorbed the local culture and customs. We were determined to fit in and not look like tourists. I even got into a debate with Nietzschean aquatic nymph. Or maybe it was Mark Twain. 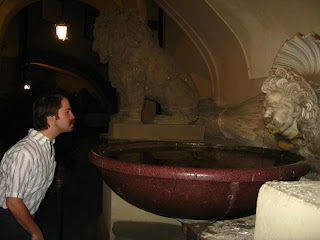 And then the former pope John Paul II knocked some sense into me.

I thought it was for this at first: 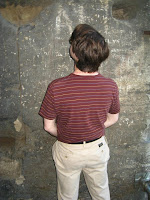 I didn't care if the Colosseum really held Rome together. But it turns out he was angry with me for being slothful, one of the seven deadly sins. So, I made my confession and swore to find employment of the gainful nature.

You can read about the vow here at my side project, I Don't Want to Be a Manchild.

On an unrelated note, here is a poem by Tom Savage I found amusing. If any of you readers want to send me things to check out and post, whether by you or your loved ones, let me know. I'm always looking to add content.
Posted by Ben Nardolilli at 8:40 AM No comments:

But hopefully not the last. Check out the details on my blog I Don't Want to Be a Manchild. The work is titled: Common Symptoms of an Enduring Chill Explained.

Here it is, isn't it a thing of beauty? If you would like to purchase a copy of the first ever volume of my poems to be printed, you can go to this link. Here you can see it being made.

Oh, and I have a poem in this issue of Fade Poetry.
Posted by Ben Nardolilli at 4:22 PM No comments:

For May/June 2011 at least. I've been travelling up and down the middle of Italy and have a backlog of new links to post for stories and poems. 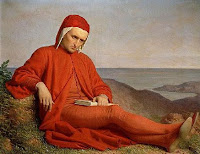 Here is a short story from Pink Eye Lemonade﻿ about global warming and protests.
I was part of a project at Super Arrow that involved creating a persona and corresponding with it. I was a crazy dying/delirious poet and I spoke with another writer who pretended to be a train conductor from Chicagoland. Neither of us knew the other.
At Poetry Super Highway, I was poet of the week with a poem about America.
UCity Review generously published two of my poems.
The Stone Hobo has a poem of mine as well as AUDIO that will let you listen to me reading it. I'm a multimedia artist now!
﻿
Posted by Ben Nardolilli at 6:01 AM No comments: