Posted by Ben Nardolilli at 7:14 PM No comments:

The Cartoon Shape I'm In

I have poems in the Avatar Review. I believe the picture I sent is the first one Josh Barajas, my Carl Van Vechten, ever took of me. Hopefully more links to more published work will be forthcoming. I just sent out a hundred or so poems today.
Posted by Ben Nardolilli at 10:56 AM No comments: 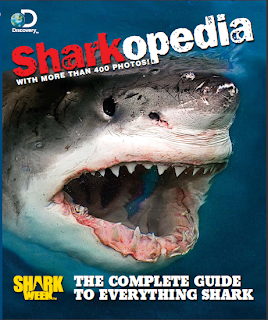 Some of you might be looking at the title of the blog post and think I’m reviewing a book of ironically titled poems which is trying to cash in/mock the current obsession (a sharknado of interest as it were) with sharks in our country. Rest assured, this is one book you can judge by its title. However, if you want to read shark-themed poetry, you can do so here. Anyway, back to the basics. Sharkopedia is 192 pages long with over 400 photos of dozens of different species of sharks. In case you were wondering, it is published in connection with Shark Week by Time Home Entertainment. Thankfully the book only makes a small mention of the program in the credits section. Its main link to the Discovery Channel’s offering is the inclusion of tidbits from shark expert Andy Dehart, who has appeared on the show.
Now, this Sharkopedia is meant for readers ages 8 and up, so in this review, I had to consider the full range of people the book is intended for. I would not recommend it for anyone younger, unless they understand that most sharks cannot live in freshwater and that none can live in a chlorinated swimming pool. Otherwise, the pictures would give them unfounded nightmares of being attacked.  I remember when I was young and I thought it was possible for a great white to wiggle its way up a drain and start chomping away at me in the wave pool at Cameron Run. For some reason, I assumed it would only attack me right as I was leaving the water. Hey, that’s sounds a good idea for a TV movie. Get on it Hollywood. Sharks in sinks! Sharks in tubs! Sharks in baptismal fonts!
Of course, a kid 8 years or older might have similar fears after reading this book. However, they will be easier to reason with. For instance, they will learn that bull sharks are the only shark to worry about when they are in freshwater. More importantly, they will learn that shark attacks are few and far between and they are rarely fatal. Only about 5,000 shark attacks have been reported in the whole world since the 1500s, resulting in roughly 500 deaths. In turn, half of these shark bites were provoked by humans. More people have probably been killed in hippopotamus attacks. While Sharkopedia does do a good job of stressing these facts, it tends to focus too much on anecdotes of shark-on-man violence, which makes it hard for the mind to accept sharks as nothing more than an ever-present threat lurking in the ocean, hungry for human flesh and thirsty for our blood.
The bulk of book is colorful and informative. All the major sharks are heavily featured: the infamous great whites, megamouths, hammerheads, nurses, makos, and tiger sharks. In addition, there are dozens of other species pictured and hundreds more listed by name. Sharkopedia does a good job showing the great variety and diversity of all eight orders of sharks. There are small sharks, giant sharks, colorful sharks, sharks that look like carpets, sharks smacking into seals, and sharks basking for zooplankton. However, there is precious little information on sharks loaning money at prohibitively high rates of interest and breaking legs in lieu of seizing collateral.
I admit, when I started to read the book, I was put off by looking at these creatures up close. I am not sure what it was exactly. Sharks do seem to be a strange mixture of other animals, a chimera of the seas. In a stereotypical species one sees the body of fish, the fins of dolphins, and the wide toothy mouths of lions or tigers. The dark eyes are reminiscent of what one finds on a massive cephalopod or one Allie Brosh’s characters from Hyperbole and a Half. Gradually, I warmed up to these creatures, aided by the discovery that some of them are capable of thermoregulation. It was also difficult to feel threatened by the pictures of blue, sharpnose, or goblin sharks. If schools of sharks were capable of dances, they would be the perpetual wallflowers unable to land a date or a partner for a song.
Sharkopedia passed an important test expected of any book meant for a younger audience. It kept me up past my bedtime, albeit one which I have set in accordance with the dictates of health and reason and not school or parental controls. Whenever I finished one page, I immediately wanted to go to the next one, eager to look at more pictures and learn more about this collection of animals so misunderstood by the general public. No matter what section of the book I turned to, there was plenty to learn. While any of these facts might be found online, nothing beats the way a book like this can appeal to the curious reader in all of us. It also provides an enlightening and entertaining reading experience for a parent looking to take a dry and safe dive together into the world of sharks with a child.
Posted by Ben Nardolilli at 10:19 PM No comments:

Get Lucky with Blurred Lines

I haven't posted anything in a while and I haven't posted poetry in an even longer time. But seeing Stephen Colbert using Henry Kissinger for his much praised performance, I don't know. It just disturbs me, along with the way everyone who is supposedly leftist and liberal looks past it. Then again, without amnesia, how could we expect Hillary Clinton to be president in 2016? She'll be making history then, as long as we can ignore the history she helped make in Babylon. I dread the day George W. Bush gets to trot out his imbecilic grin and give voice to it on the Simpsons Treehouse of Horror LVII. It will be heralded, maybe even nominated for an Emmy. So it goes.

Get Lucky with Blurred Lines

You tell yourself he cannot be an Eichmann, no,
He is a Jew and an old Jew at that,
An old Jew could never commit such terrible crimes
Not for the banal reason of an promotion, a desk,
Evil always has an ideology behind it, at least
Evil in America needs a cross to rally behind or burn.

And he can easily go along with the joke, evil
Never jokes, never makes a cameo,
Evil demands the spotlight, it demands to be a star,
Of course you are a star too, with a show,
A show where you dance with him while an audience
Too young to remember a secret bombing laughs.

The script calls for him to call for security
To escort you from the premises,
Decades ago, he called on friends in other countries
To overthrow their presidents, fill stadiums up
With folksinging hooligans and gun them all down,
Perhaps you want to highlight the contrast?

Here he is now, harmless like an urchin,
A buffoon who might even drop his glasses in a toilet,
An elder statesman with his gravitas swinging
Like a snood tucked under his pale chin,
You are old enough to remember beauties hooking
Their arms with him to promenade down  red carpets.

He gives off no aphrodisiac now, not for you, no,
You dance too quickly for him to catch you,
Even if the camera lingers, the smell does not reach you,
You are too busy, you must go embrace an actor,
Meanwhile, the urchin leaves his desk behind


To sway a would-be candidate waiting in the wings.
Posted by Ben Nardolilli at 8:31 PM No comments: