Celebrate with me by reading my new poem up at The Planet Formerly Known As Earth.
Posted by Ben Nardolilli at 1:09 PM No comments:

New Poems From the Edge to the Center 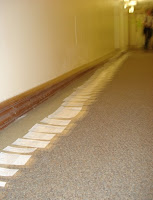 Hello y'all. Here are two poems of mine featured in Radius. If you either love/hate Beowulf, I think you'll enjoy the second one. The first? I have no idea.
Posted by Ben Nardolilli at 8:18 PM No comments:

Read Me on Your Kindle

I have a short story up at The Write Room. You can read it the old fashioned way online or the new and improved way on your Kindles! Me? I will be reading it on vellum.
Posted by Ben Nardolilli at 7:14 AM No comments:

I'll start with the later. The ever generous Record Magazine has published a bunch of my poems, a mixture of older and newer work. Take in their motley goodness.

Now, onto the more important stuff: experiments in unhealthy living!

Well, since my time in Montclair, New Jersey is coming to an end and it's back to Arlington for me, I've decided to try and give back to the community by creating some sort of treat that could be named after the city. There will probably be a book written about my time here as well, but for now, I'm going to focus on something a little more tangible.

And that something is a candy sandwich. Work with what you know, right? I have friends who have created blogs about food and their cooking expertise, or who post pictures of their meals onto FaceBook. It makes me jealous that they know how to cook so well, and that they can afford something other than diret-from-the-can goods. So, I am going to show them up here with my own creations. The advantage is that anything I can do, you can do too (and probably better).

Anyway, I recently came into the possession of some Girl Scout cookies, of the Thin Mint and Dulce de Leche variety. I also have some candy I bought on sale after Valentine's Day. Like any good inventor, I decided to work with what I had in surplus. I thought of various combinations that might work until I hit up two that had the greatest chance of success of becoming known to future generations as a "Montclair." Both would have a peanut butter cup in the middle that would be flipped upside down so that it resembles the "Mont," in the city's name. The difference would come from the "bread," which could either be two Thin Mints or two Dulce de Leche cookies.

I had the Thin Mint version first: 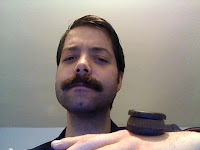 I give it a B-. The Thin mints were hard to hold onto because they melted in my hand. It was difficult to get much taste from the mint. The chocolate cookie portion mixed well with the peanut butter and kept it from completely overpowering the sandwich. It was difficult to get a bite that contained both ingredients because the Thin Mints crumbled easily when they came into contact with my teeth. In addition, the sandwich left a metallic aftertaste in my mouth a few minutes after I had eaten it. Maybe it was from my heart imploding.

Then I made myself the Dulce de Leche variety: 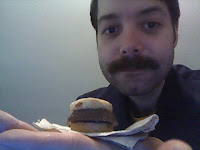 It kind of looks like a hamburger from a distance, but don't be fooled! This is strictly a dessert, or lunch if you're me. Anyway, this gets an A and wins the competition. It shall ever be referred to as a "Montclair." The Dulce de Leche cookies did not crumble and held together. They added a texture and cinnamon flavor to the peanut butter and chocolate that was reminiscent of a Graham cracker (which was invented in nearby Bound Brook, New Jersey). But it avoided the dryness of that Graham crackers often have. So there you have it America, go raid your pantries and make yourselves a Montclair today!
Posted by Ben Nardolilli at 12:30 PM 2 comments:

A short, speculative piece of mine is up at Quail Bell Magazine. It was posted back in 2006 on Flashes of Speculation, but it has been reborn here.
Posted by Ben Nardolilli at 9:45 AM No comments:

A Death in Midtown

Thomas Mann and Luchino Visconti, eat your hearts out. Or not. Anyway I have a new short story for all of your prose lovers to read. "A Death in Midtown" is in the current issue of the Dispatch Litareview. You can read it directly here, on page 16. Also, LitKicks has linked to the InDigest WikiLeaks Centos E-Chapbook Anthology that I'm in.
Posted by Ben Nardolilli at 10:01 AM 1 comment:

Shaking my Fist at Mat Black

Apologies for any confusion with Matt Black. I have two poems in the current issue of Boston's Shakefist Magazine, and two up at Mat Black Online. Read 'em and enjoy. If you want to weep, well stay away from your keyboards.
Posted by Ben Nardolilli at 7:46 AM No comments: