The Route of the Next Women's March on DC

Hopefully, we won't have to have another march like the one yesterday ever again. Nevertheless I think we need to be prepared for next time. While there was a planned route, it quickly broke down. It was for the best of reasons though, namely that so many people showed up! Inspiring as that may be, I doubt we'll have the freedom to organize ourselves and spread out peacefully under the noses of the authorities in the future.

Now I have no intention of mansplaining here, this is just an idea for the route of the next possible march to take. I think we should start at L'Enfant Plaza and from there head north. Just as a baby was born there once, so shall the next march be born there as well: 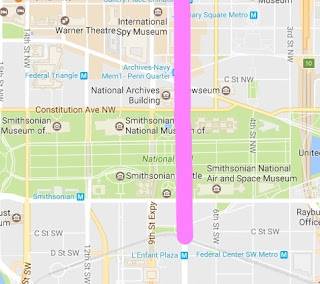 This will take the march through the Mall and next to all the important museums. Tourists won't be able to avoid us. After politicians, I think they're the next most important group to reach out to. Then at H Street we will branch off into two groups. Going any farther north will be trouble because there won't be enough space and amenities to support the protest: 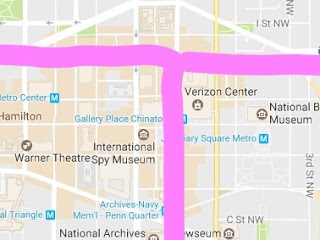 One group will head east and curl around Union Station and end near the Capitol grounds to make our case heard to the legislative and judicial branches: 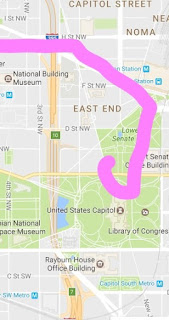 However, that will still leave the executive branch to reach out to, and reach out we will! How? By walking over to 17th Street, then going down past the White House to occupy the space between it and the Washington Monument:

So the next Women's March on DC will look something like this:

Posted by Ben Nardolilli at 11:12 PM No comments:

This image has been making the rounds lately in one form or another: 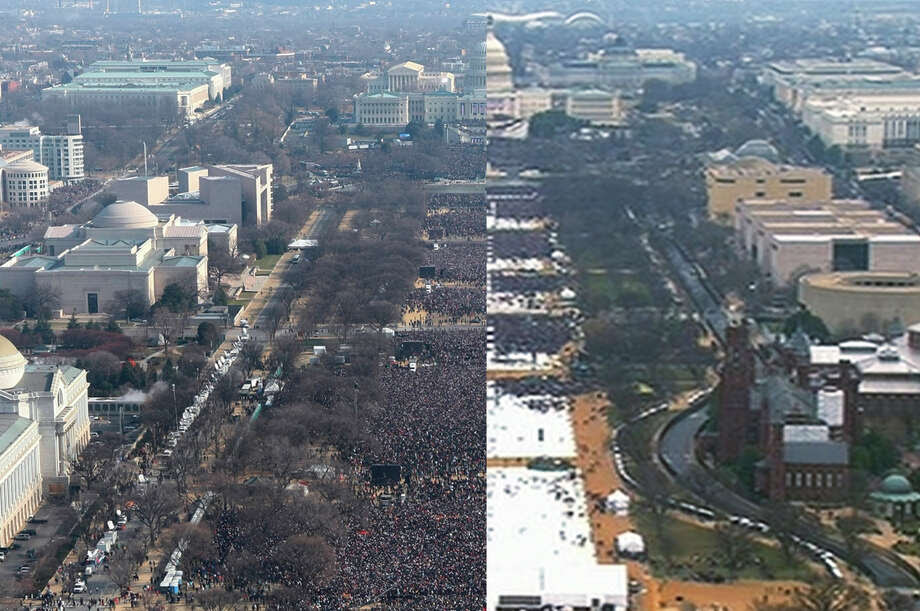 ...in order to compare attendance at Obama's 2009 inauguration compared to Trump's in 2017. I just want to say this is a very misleading image. All that white you see was actually filled with people. They were just wearing hoods.
Posted by Ben Nardolilli at 8:40 AM No comments:

2) At the same time it's presence has begun to mobilize the sleeping giantess of the opposition.

3) It leaves them exposed with nowhere to go and no one to protect them now that they've come out of the woodwork.

4) They're going to be nostalgic for the days of "PC Culture" and SJWs, when would-be radicals spent their time arguing about pop culture online. They never realized that things they hate so much were just fly traps for the Left. Now they've gotten them off the internet and into the streets* and the Alt-Right is going to realize just how small they are in reality. Couldn't happen to a nicer group of people.

* I think that when historians look at this period, they will see things starting to change with BLM, but accelerating under Trump. Trump is, after all, an Accelerationist's wet dream.
Posted by Ben Nardolilli at 8:52 AM No comments:

Life Anew Is a Kind of Shibboleth

Posted by Ben Nardolilli at 8:20 AM No comments:

I guess any work with the word Renewal is fitting for this time of year, maybe for this place the country is in right now. Perhaps though it is too early to speak of renewal in the later case. Anyway, I have a poem called Renewing Renewal in Issue 2 of Nixes Mate next to work by Howie Good (a prose poem) and David Spicer musing about what ti would be like if nature had granted men two penises (penii?) like it has for other animals.
Posted by Ben Nardolilli at 8:09 PM No comments: