Alright, so first off I have three poems in "Ditch" a Canadian literary journal, it has the poetry "that matters" which is obvious because I'm in there. Hope you enjoy what you see. I find it amusing that I'm in the "International" section, even though I'm probably closer to where Ditch is compiled and released than anyone in Vancouver, but that's the way it is.

And I also have gotten a short story on The Tiny Globule, called "Scree at the Beach," I wrote it years ago, well, it seems like it. I wrote it for my first creative writing class at NYU. It pretty much summed up my neuroses while going on vacation with my family to Virginia Beach, you can see where my thoughts were wandering at the time when I just wanted to get out of the house and Virginia for good! I'm just happy to have a prose credit to my name.

Also, does anyone think "Einstein disguised as Robin Hood" would be good as a title, not even thinking about what the book itself, just judging by the cover. What about "Einstein and Robin Hood?" Ten points if you can guess the source and your last name does not rhyme with "praying mantis"
Posted by B. Ellis at 7:58 AM 3 comments: 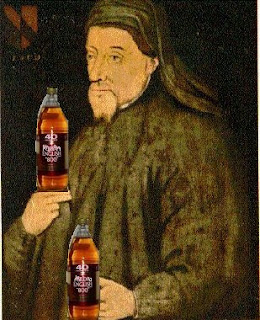 Well, I was in my apartment last night, having a good time with some peoples, and yes alcohol was involved and I came up with a marvelous idea: Middle English Malt Liquor. There is already Olde English, but nothing to represent the language that really got English literature and identity rolling. I think it is a great idea and it would be a big hit with Lit and Middle Ages scholars from all around.

I can imagine a possible ad campaign:

Bathe Every Veyne in Swich Licour!

An article on AOL news caught my eye, Historians See Little Chance for McCain and having been a history major, I read it, trying to see what grand truths from the march of time were being distilled.

Well, as the article says, a group of historians think that despite the apparent dead heat between the candidates, McCain will ultimately not win. Basically the thinking is that McCain happens to be from the party in power, and that party has been in charge for a number of years, and has not used them wisely. People want change, a feeling that helped Obama surge from out of nowhere to clinch the Democratic nomination. The article does point out, however, that McCain is not seen as a traditional Republican, and so that can help him. Also, he can play to racial fears and hatreds, and paint Obama as a closet Muslim and Marxist. Obama can strike back and bring up age. So the election this year can be pretty dirty, so much fodder for everyone to use.

There are two main comparisons made, with the presidential elections of 1968 and 1980. In 1968, there was an unpopular war and the party was not held in high esteem. In 1980, the sitting president was unpopular and even though he was an incumbent, there was a demand for a new approach to politics that somehow Reagan positioned himself as representing.

The problem with making such generalizations is that presidential elections are rarely mirror copies of each other. No one seems to make comparisons along the lines of, "this election is just like 1824..." or "we'll have a repeat of Tilden and Hayes!" Of course the modern party system begins in 1860, and electioneering as we know it started around the 1960 contest between Nixon and Kennedy, so there are few elections we can make comparisons too.

However I do think McCain's chances at winning are not very good. Slim, perhaps, but not impossible. His age, lukewarm support from his base, and his party are contributing factors to this. But comparisons to 1968 or 1980, are not well founded, despite the fact that this could prove to be a watershed election in which the Republican coalition (libertarians, social conservatives, security moms and dads, and business types) collapses, or begins to come apart at the seems.

Firstly, in 1968 there was an unpopular war, but not unpopular with everybody. In 1968 the tide was turning, but a majority still wanted to continue the war in Vietnam. If anything, people probably thought Johnson was not doing enough. And, even though the war was fought under a Democratic president at the time, the Republicans were pretty much staunchly for the it. There was no "peace" ticket. Humphrey probably would have beaten Nixon, and his defeat owed more to a strong independent candidate (Wallace) who took away blue collar and southern votes, than to the war.

In 1980, the situation was similar, and one could make a comparison between Obama and Reagan and the rhetoric they use, and the way they are perceived as bringing change to the table. Also, 2008 could prove to be a sweep for the democrats, much as it was for the Republicans in 1980. However the president is not running again and the candidate from the ruling party might be able to distance himself from the president. One has to go to 1928, to find an election with no vice-president or president running. This was an historical election too, because of the nomination of Al Smith for president, a catholic.

Perhaps the 1928 election provides the best example, given its historic significance in nominating a president from a minority group, and in the fact that there was no incumbent. In 1928 the first major chinks in the "Solid South" appeared because of Smith's religion. In 2008, a few southern states might go to Obama given the unpopularity of the current president, his popularity with the black electorate, and evangelical dissatisfaction with the Republicans (Plus the candidacy of Bob Barr). I doubt he will sweep the region, but he might win one or two states, and might help the Democrats pick up a few congressional elections.
Posted by B. Ellis at 8:44 AM 2 comments:

A Poem From Andrea's Blog

Well I wrote a poem based on the text of my friend Andrea's latest blog post. It's all cut-up, but there are patterns underneath, that my verse uncovers in its own special brand of alchemy. or something like that. This be the verse(s):

Rich by the Bosses

Like my sassy grandmother
We got there all day.
I was reminded
At my job scoring again
With another comedian
Whose name confuses possession.

Today, the gruesome
Drove around on tour,
The workplace around me
Left to explore guts
In different directions

I had just a bar,
Adequately entertained,
Then a benefit
Whose name I don't remember
Damn these crimes

Mike’s memories,
Keep the story
Miserable as usual,
I shouldn't actually have this,
I tour with a serial rapist.