I'm more of a coffee man than a tea man, but I'm more of a beer man than a coffee man, so when you mix beer and tea together, I'll give it a try. Frankly I've never had the combination before. Yes, I've had vodka and tea, and unidentified malt beverage and tea, but never true, brewed beer and tea. Thanks to the Owl's Brew company, I get to expand my taste horizons this way. 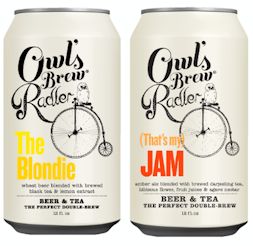 Up for review are two products from this fine business: That's My Jam and The Blondie. They both combine beer and tea to create different flavors, finely balancing bubbly and bitter, sweet and tangy. You might think the use of the Penny Farthing is an homage to the Prisoner. You may be right. But there's solid history behind it, because these kinds of beer, tea, and lemonade drinks were developed for thirsty bicyclists on the go. On the back of the can it reads "Do us a solid and fill in the blank: I drink @theowlsbrew when I____________." Well I guess based on my experience I can say that I drink the Owl's Brew when I watch David Lynch's Mullholland Drive. Owl's Brew Radler didn't exactly clear anything up but that's not a knock against it. Perhaps I should've drank Mezcal instead.

That's My Jam is better on first taste and if you're looking for just one can to drink at a time, I would recommend it over The Blondie. It's a sweet, fruity concoction, perfect for the warm spring days I'm sure we'll be having any day now. It combines Darjeeling and fruit peel, a little heavier than a pure cider.

The Blondie is the drink for those long Sunday afternoons trying to get through an inane conversation at a party. That's My Jam is too sweet to go down six times in a row. The Blondie though, is for any long-haul drinking you might have (but please drink responsibly etc.) It tastes more like a traditional shandy, less like a cider. It combines black tea and citrus juices. Which ones? It's a mystery! Perhaps the red finger lime, or even more exotic, an etrog. Hey, a drinker can dream, right?

The relatively lower alcohol content and the mix of flavors in these beers also means they can be used for cocktail purposes. The Owl's Brew also sells cocktail mixes, but these radlers work just fine. I tried them both with vodka, that universal solvent for unlocking the good and bad time out of everything. I found that the Blondie works better than the Jam. the Blondie covers the vodka and smooths it out.  The Jam gets frothy upon contact and it's pretty sweet after a while. Now sweet might, in fact, "be your jam." it certainly is my girlfriend's. She liked That's My Jam over The Blondie. Then again maybe its because she's The Brunette.

Both of these drinks are fine and if you're a tea enthusiast, I would recommend them both. The only thing I didn't like was the plastic used to hold the six packs together. To be fair, I got these drinks straight from the source. In the store it might be different. The plastic is hard to describe. It's orange and thick, almost like tiny Frisbees settling over each can. My girlfriend had trouble pulling the cans out because of it. The plastic is hard and it's loud when you try to snap a drink loose. If you're trying to hide your drinking from someone, I wouldn't recommend these beers. Or you can just wait until they leave and untangle the cans all at once.

Posted by Ben Nardolilli at 9:11 AM No comments:

To Lisbon via Adelaide

Adelaide, a publication based out of New York and Lisbon, Portugal, has published five of my poems. Read them here, perhaps while listening to the song "Adelaide" by John Cale.
Posted by Ben Nardolilli at 7:24 PM No comments:

What are Our Consolations? The Oracles of Fried Food

A poem of mine is up at the newly reconstituted Tak-Tak. In unrelated news, I'm trying to do my taxes and I came across this little tidbit:

Parent of a Kidnapped Child

If your child is presumed by law enforcement authorities to have
been kidnapped by someone who is not a family member, you
may be able to take the child into account in determining your eligibility
for the head of household or qualifying widow(er) filing
status, the dependency exemption, the child tax credit, and the
earned income credit (EIC). But you have to file Form 1040A or
1040 to claim these benefits. For details, see Pub. 501 (Pub. 596
for the EIC).

They really do think of everything at the IRS! I wonder if this came about because of J. Paul Getty?

Posted by Ben Nardolilli at 8:13 PM No comments: