A Letter in Time

Well, I thought that I’d try and get another post in before the end of the month. I have kept up my summer tradition of appearing in at least one magazine. Last year it was New York Magazine for a luxurious spread (google my name and it will come up), this summer it is Time Magazine, which my parents subscribe to and I read when I’m home, because they keep the old issues stacked up on their coffee table.

The letter I sent in was in regards to a story run about Mitt Romney. I basically attacked the notion that a candidate’s faith is not an issue. I believe that it is. Either because A) it informs the decisions they make, or B) if it doesn’t, then they have to explain why they feel privileged to sacrifice their conscience. In the case of Mitt Romney he will be earning money from taxpayers that will go in part to the LDS Church. (Now it seems he is not accepting any salary and will donate it to charity, though I wonder if it will be one that is secular and behind all Americans.)

My Original letter was thus:

Mitt Romney in the White House? I don't think this country can take another teetotaller for president!

Your article regarding Romney's Mormon faith, claiming that it is bigotry to question his religion I think misses the point that if he is elected, at least ten percent of his income, which comes from the tax payers of this country, will be going to support the Mormon Church, and so we as Americans have the right, I think, to ask him what he believes and what he supports. Remember, this was a church that until the 1970s believed Black people could not go to heaven, is prejudiced against women's rights, and believes in a history of the New World that is directly at odds with genetics and archaeology, not mention that their holy book, despite all those problems, originally contained hundreds of grammatical errors and plagarizations from the King James version of the Bible. When several of the candidates for the GOP nomination can stand up and honestly say they don't "believe" in evolution, we cannot sit back and simply refrain from a critical analysis of what other people believe out of some sort of courtesy. Politicians' faith is a very public thing, it informs policy decisions before the facts are heard on either side of an issue.

The Letter that Time edited for their magazine:

Mitt Romney in the White House [May 21]? If he were elected, at least 10% of his income--which would come from us taxpayers--would go to the Church of Jesus Christ of Latter-day Saints. Remember, this is a church that until the late '70s believed blacks couldn't go to the highest tier of heaven, limits women's role and believes in a history of the New World that is at odds with scientific facts. We can't refrain from a critical analysis of what people believe out of some sort of courtesy. Politicians' faith is a very public thing.
Benjamin E. Nardolilli ARLINGTON, VA.

You can see the criticism of their holy writ was removed and the joke I put in at the top, but I think the essence of the piece remains, the most important thing is the role of blacks and the history of the Americas in Later-Day theology.

The letter has been making its rounds throughout the world I suppose. Recently a girl I knew in Middle school talked to me a Facebook, telling me she had read my letter.
Posted by B. Ellis at 5:16 PM 1 comment:

A Coat of Arms 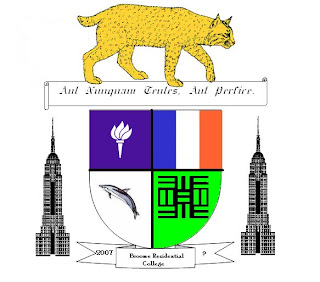 Being in the Broome Street Residential College next year, I decided to contribute to the nascent organization by designing a coat of arms to represent us. It's a little bit complicated and so I don't know how reproducible it is, but then I guess no coat of arms or state seal really is, they were designed after all, to identify knights and the more complex the design, the least likely it would be copied.

I decided that our coat of arms should reflect what we hope to achieve this year in the college. Since we are a part of New York University, I have put it a picture of our logo, with the torch on its purple background, reflecting our school colors. The blue, white, and orange flag in the upper right hand corner is based on the flag of New York City and including it with the NYU logo reminds us of where we are and our mission of building a private university in the public service.

The Design in the bottom right is taken from Ghana and is a symbol of learning,“nea onnim”, which is representative of learning as a life long process. The green behind it is taken from Middle Eastern cultures, which use the color to signify learning. The dolphin might surprise some of you, it is taken from traditional heraldry, when the dolphin was seen as a symbol of charity. I wanted to represent this idea on the coat of arms because service is one of the goals of the residential college.

Anyone familiar with the university will recognize the bobcat towering over the shield. It is the mascot of NYU and though fierce, is caring and protective towards its young, nurturing them in full. The motto I have chosen for Broome Street: "Aut nunquam tentes, aut perfice." Translates roughly to: do not attempt, complete. I think that this is relevant to us because the Broome Residential College will have requirements for its residents and it expects these to be met as a condition of living here.

On the sides I have placed drawings of the Empire State Building, once again to remind ourselves that we are of the city and not the fields and the woods. Like the skyscraper, we aspire to great heights and lofty ideals.
Posted by B. Ellis at 2:52 PM 1 comment:

Let's say one's name was Joe Hitler. It could be short for Josephine or Joseph either way you were born with the surname Hitler. Exactly like the infamous madman. What would you do if you were in such a situation? Would you live with the name, abbreviating it to "H" like some Kafkaesque character, changing it to something explosive like Joe Dynamite, or would you do something to completely change the meaning of the name forever? Let's say you chose this option and cured cancer...why then there would be a Hitler University, Hitler Prizes, Hitler Streets, Hitler Day, all named after you, with the unfortunate last name also being shared by a genocidal maniac. Despite this it would be like the bastard had won the War, so much bearing his last name. Now his reputation would remain, so I guess your actions would never be able to totally cleanse the name, but you could make it worthy of being filled out in full on a sticker with a permanent marker at some convention or other. You would never be refered to as "the" Hitler, but you would open the door for other people to take up the name and do things with it, you would free the whole family from the burden of Adolf's legacy.
Posted by B. Ellis at 10:19 AM 1 comment:

Labels: Hitler, what if?

Arlington - The Real A - Town

Well I am back in Arlington Virginia, have been for almost a week now. Things haven't changed much at home, but the city itself is always different. Buildings go up where parking lots once stood. Teachers leave and new students come in. The general look of things tough remains the same. Rossyln has its retro, idealistic urban planning fee, the park near me is still filled with more fallen trees than standing ones, the Metro is still distopian, and Balston continues to look as though it was designed by Will Wright at the team at Sim City 3000.

Energy-wise things have changed for me. New York was so fast and Arlington is so laid back by comparison. Of course when it comes to all things political, Arlington is always ready for a fight, but otherwise they take things much slower. They probably have to because of the humidity down here and the traffic. One of the things I have to get used to down here is that the pedestrian is but a peasant next to the majesty that is the SUV.

Yet there is an odd burst of creative energy I am feeling now. I'm not sure that if it is because I am home, or because I have mroe free time now that school is out, or rather because Arlington provides less distractions, I am getting serious work done. Already I have written two short stories (one about the IHOP in Ballston) and finished my play based on Oedipus Rex. Arlington seems to make things get done, although it doesn't seem to inspire the spark of genius that is the seed and root of each work. I guess it is analgous to the way it works with politics, obessed with the system and the departments and elections more than the ideologies themselves (though Arlington is a one party state)
Posted by B. Ellis at 9:20 PM 1 comment:

Well a while back I wrote about Poetry.com a website that lets you enter contests and win money. They also publish your poetry if they deem it worthy. Some research on the web however, showed me the true nature of this site. How lazy of me! I had stumbled across poetry.com by typing the desire website name in Google and seeing if one existed. If only I had scrolled down, I would have seen that it is considered a fraud. They make you pay to enter their competitions and they don;t screen the poetry that comes to them for publication. Rather they agree to publish anything which makes them a VANITY PRESS.

I stopped putting things on their website except for the occasional daily poetry contest, only because I like to use their magnetic poetry to try and make poems from odd images and combinations of words. However if they ask for money for anything, I refuse. Recently they sent something in the mail to me in NY, asking if I would like to be published in their anthology. I declined by not responding. The books are dense and they only publish short poems so they can cram as many as they can into one.

When it is active, I am thinking of entering the contest over at Winning Writers, Where one can submit a poem to poetry.com that is basically doggerel and see it offered for publication. You can win a prize for showing that poetry.com will publish anything.