Images of the Inspiration

I think this poem came from an assignment revolving around E.E. Cummings' "may i feel said he" nobody else wants it, so I'll give the orphan a home here.

The Images of the Inspiration

A mountain gives way
To a hand that squeezes it,
Fingers grip the foothills
And proceed to the peak
Where they stop and dance.

The ridge rises and a breath
Heaves a ghost out from a mouth,
She falls to the bed and he follows her.

Buttons slide from holes and come out,
Skin flies open and strong, a pale ocean
Opens up that his hands skate along
As the flags that cover them up fall to the floor.

Coming together in one vessel, waves
Turn them over and each one struggles
To be the general, the prophet, the genius
She wants to play a game,
He wants to divide and conquer.

Arms hold, they swallow her body,
Cover her in new clothes that he made:
Strong bars of iron, she wears him like a cage,
His lips come down to her forehead,
She is smacked by them until she is numb.

The battering ram lowers and is dropped
Barbarians ease through the gate
It is raised again, though the gate has fallen,
It comes down beating the walls like a drum
Waiting for everything to fall.

A wail stops the rhythm,
But he resumes
Once there is a promise
That comes from his heart
Like a blind messenger in the night,
A vague contrition coupled with a plea
To let him continue with his drumming.

Her skin grows cold, though only
A patch on her shoulder holds winter
While the rest of her sweats summer,
His finger carries the feeling of night
It rolls on her skin and she feels it
A wheel of gold spinning along.

He lights a cigarette, the paper sail
In his lips ignites and spreads smoke,
For him a convenient curtain
To announce the end of the action and
The coming of the next scene,
For her, it gathers like a storm
And her breath stops, trying to hold in
The air of the recent past.
Posted by B. Ellis at 8:01 PM 1 comment:

Not owning a television makes one forget there's an election going on. Hard to believe that conventions are right around the corner. In 2004, I was mostly at home during the summer and in the DC area, so EVERYTHING was about the election. But this one has passed me by for the most part, I guess because I don't really care that much. It's the name smoke and mirrors as far as I'm concerned. Plus I'm unemployed and neither of the candidates seems to have any ideas for real job creation, especially for young people. So the red elephant and blue donkey, they can all claw at each other's throats.

But nonetheless, I still like to comment on it all even though I don;t think it matters what happens. This is probably why I hate sports. I basically treat the elections like matches. That is what I put my powers of analysis and prediction into. While others look at the election with care and at sports with the enthusiasm of little armchair strategists, I leave sports behind and look at elections, if only to keep my wits up. For me democracy is just a game, and sports are the real waste of time.

Anyways, I was looking at the polling information, because I originally wanted to write how shocking it is that the election is so close (once again, because the liberal is a wuss). And I came across this article: "Caroline Kennedy floated for VP." I can't believe what Michael Moore is suggesting. Yes, let's convince America's of its doubts of Obama by having a wealthy daughter of a president with no foreign policy experience on the ticket.

The stupidity of this suggestion is paramount, it would be better for him to try and nominate Lieberman than Kennedy, better to drag Ted Kennedy out than Caroline, if all he wants is the name of America's 1# overrated family on his ticket.

Here is why Mr. Moore doesn't know what he's talking about:

1) She's an elite, something Obama is trying to fight again

2) She is the daughter of privilege, again, something that is not appealing

3) She has never run for office

4) She has never held any sort of office

6) She says that Obama will be a "president like her father"....her father who really didn't do anything, whose greatest legacy was the Bay of Pigs debacle (which led to the Cuban missile crisis), and who was nothing but charismatic with lots of empty promises and...oh wait...I guess he probably will be like her father. Then according to that logic, Obama will have a policy wonk VP who will get the real work done after the president is assassinated, a la LBJ to JFK. Of course that is only the implication of C. Kennedy's words. History does have a tendency to repeat itself though. First time tragedy, second time farce.

Of course this will probably all be made obsolete by Obama's announcement of his VP, whenever it comes. Oh, and I think Tim Kaine would not be a great idea either. Not a terrible idea, but not a great one either.
Posted by B. Ellis at 1:24 PM 1 comment:

Today I passed another milestone in my writing, two million words. That makes since the start of my recording these statistics in June of 2006, over 1,589,143 words written, for an average of 2,017 words per day. Some of them have appeared in print. Others have not. Since I am a bit of a sucker for statistics, here is a breakdown
Progress by Day: 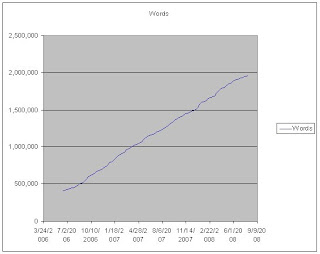 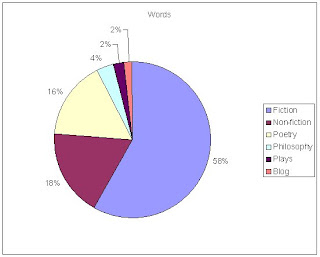 The website Writers Revolutions (check them out on Facebook too) has put up three poems of mine, centered around this week's theme of Coffee. Check them out:
In this Temple of Bagels and Coffee
(anyone from Arlington want to guess where I wrote this one, you are welcome to try)
Landmark Pancakes
In Case of Accident