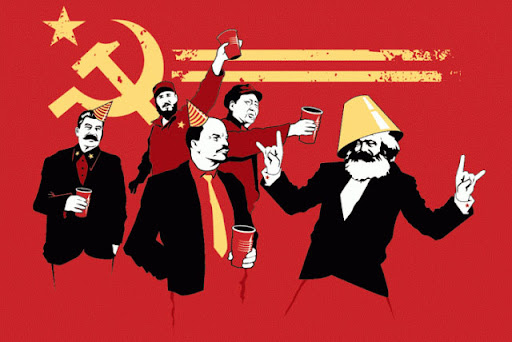 Two new links to post for all of you guys to check out. The first is a short story of mine called "Chaplinesque,"   the name of which some of you might recognize. It is currently up at the Squawk Back. This is my first serialized piece of fiction. Part two will be shown later.

If you're in the mood for a whole piece and nothing cut in half like Solomon's baby (which could also be the name of a literary journal), you can view a poem of mine up at Samizdat.
Posted by Ben Nardolilli at 3:30 PM No comments:

Can There Be a Five Albums Test for Writers? A new topic for discussion in music, or should I say, a new metric for discussions, has appeared for people to use in debating the merits of various bands and artists. This is the five albums test, developed by Steven Hyden over at the AV Club. The idea is that in addition to the two present ways of rating musical groups (popularity and critical consensus) there is a third way, seeing if a group (or a solo musician) produced a run of five great albums back to back. Now, why five instead of four or six? Mr. Hyden explains why:


"First of all, it’s a nice round number, and nice round numbers are helpful for arbitrary (but fun!) discussions about music. Second, it just feels right, perhaps because there’s a handy parallel with TV shows, which generally have to survive for five seasons in order to reach 100 episodes, which is the magic number for syndication."

He admits there are limitations to the system and he does not intend for it to be the only way of looking at a group, especially since many musicians and groups who are otherwise great fail to make five good albums in a row. Or they may not make albums at all and focus on singles (or symphonies) instead. A good example of groups that pass the test as mentioned in the article are The Beatles and Led Zeppelin. Others are open for debate, such as the Rolling Stones or Bob Dylan.

The idea has spread into other quarters and at Salon, Matt Zoller Seitz has tried to use a similar criteria for movie actors and actresses. However, his test does not use albums as a standard, but performances in films. One actor he cites for delivering five great performances in a row is Robert De Niro (three of them being Meet the Parents, Meet the Fockers, and Little Fockers). So far, I have not come across any other uses of the test, but I have been thinking how it may or may not apply to literature and what that says about the differences between writing and making music.

A major problem with trying to use such a standard with writers is that there are so many variables to consider, the least of all being someone's subjective taste. First of all, writers produce so many different kinds of products and finding a standard to measure them by is difficult. The novel might seem like a logical choice for judging, but this would exclude playwrights, poets, essayists, and short story writers, along with anyone who worked in multiple formats. How can a strict novelist be compared with someone who may have put out two novels and half a dozen short story collections?

Perhaps each group could be separated, the novelists in one camp, the short story writers in another and so on (though the problem of figures like Flannery O'Connor or George Orwell would remain). Even then, trying to compare five items in a row would still be difficult. Short stories are especially problematic since they often appear together in different orders depending on the collections they are in, an order that might not reflect when they were first written and first published. Poetry suffers from the same issue, since a poet will often come out with several books that combine their previously released works. While the same often happens in music, most artists will release their songs in a general chronological order. Works from decades apart are usually not released for the first time next to one another.

Timing, which is crucial to the five albums or five performances test, simply cannot be used when comparing the quality of different writers. Often there are pieces produced between great works or before them and only released posthumously, more often than not because the authors never felt they were good enough. Did the recent publication of And the Hippos Were Boiled in Their Tanks mean that the critical judgment of Jack Kerouac and William S. Burroughs had to be immediately reassessed, even though it came out years before they published anything else? So much that writers produce gets rewritten from its original and what is not published often languishes until resurrected later. How is such material supposed to fit in a writer's oeuvre? The only comparable situation one finds in music are rare albums such as Brian Wilson's Smile.

Adding to this are the problems of prolificacy and length. A writer may write only two or three novels that are incredibly long while another one produces a dozen or more that are only a hundred or so pages long. Can they be compared? Should a write be measured not by five works but by five hundred pages of combined good material instead? I suppose this is the premise behind the Viking Portable Library, which is the perfect way to compare Joyce and Faulkner when you are raiding the coast of England.  But this approach allows short story writers a greater range to showcase their work and truncates all that novelists have to present to the world.

Poetry adds further problems. The first of which is the issue of collection and collation mentioned above. Poems are often written at different times and combined with one another in various forms. Some poets release books that then are combined into collected works, while others just publish in journals and come out with a collected works much later. Some poets produce books with poems that are thematically linked and structurally entwined, approximating the way the songs on a great album work together, but usually this does not happen. A five poem test might suffice at first glance, but while this would work in comparing Eliot to Ginsberg or Plath, poets like Whitman, Berryman, or Pound would have trouble competing. They released books that were almost like cathedrals of paper and ink, each small poem contributing to an overall effect.

In the future, the five albums test might become obsolete as well, as new methods of producing and disseminating music make the genre more reflective of the way literature is produced, in bits and pieces that are often packaged together out of pragmatic rather than artistic concerns. Even when artistry and craft are behind the decisions of how to market pieces together, these outputs will shift as the three minute song continues to lose dominance. Songs are already released by themselves, in several versions of varying lengths, this trend will grow. Soon, having different lyrics over different tunes will become more common. Even who plays the music may shift. One group of musicians will not be viewed as producing the "original" and all others producing "covers."

We have seen a situation like this before though, and people still compare the musicians and composers who worked then, asking who was better, Beethoven or Mozart?
Posted by Ben Nardolilli at 11:02 AM No comments:

I published a poem at Mouse Tales Press a few months ago, well, here it is for your reading pleasure.

Also, I wrote an essay on writing at my other blog I Don't Wanna Be A Manchild.
Posted by Ben Nardolilli at 3:00 PM No comments:

Best of Poetry in the Corner Club Press Issue 3

The most recent issue of of the Corner Club Press is out, and I'm in it. Not only that, I was selected to be the best poet for it.

I also have a poem I wrote at Dr. Hurley's Snake Oil Cure in response to the slide above.

My friend Lisa Marie Basile is raising money for her Patasola Press, which is focused on improving the presence of women in poetry. Here's the link to her project on Kickstarter.
Posted by Ben Nardolilli at 12:08 PM 2 comments:

THE LOGO FOR ANOBIUM MAGAZINE MAKES ME WANT TO WRITE EVERYTHING IN ALL-CAPS. ORDER IT NOW OFF THEIR WEBSITE AND YOU WILL FIND A POEM OF MINE DELIVERED TO YOUR DOOR.
Posted by Ben Nardolilli at 7:13 AM No comments:

A small poem of mine, only three lines long, is up at Three Line Poetry. Dig around for me, I'm in there in issue 3. Also, I noticed that Grover Cleveland is shaped a lot like the Penguin from Batman Returns, albeit with a mustache. Maybe it's just me. Perhaps he would be the Penguin's sidekick: the Walrus.

A Moment for James Garfield

While you all are busy celebrating Independence Day here in the United States, Bahia, or Belarus, take a moment to reflect on poor old James Abram Garfield, who was shot on this date in 1881 by Charles Guiteau. 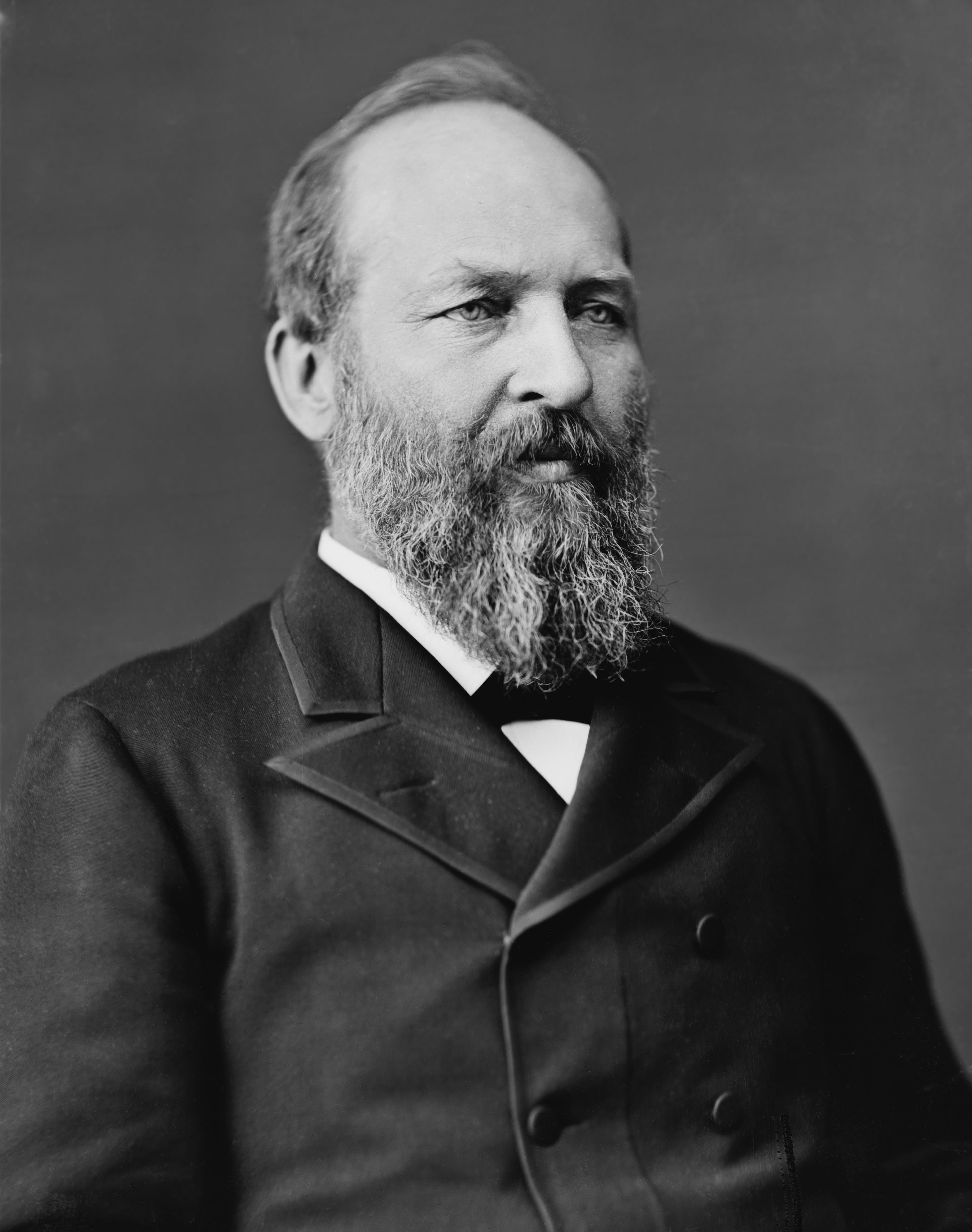 Apparently, Garfield (who had the second shortest presidency after William Henry Harrison) would've been one of our better presidents if he had lived. Nevertheless, he appointed more Supreme Court Justices than presidents Carter, Taylor, or Johnson. President Garfield argued for a bi-metal monetary system, modernizing agriculture, educating the electorate, and greater civil rights for African Americans. He also proposed civil service reform to decrease the number of jobs filled due to political patronage. However it was not until his assassination that these reforms would get the necessary push to be passed. Charles Guiteau, who had expected a job in the government for supporting the Republican Party's nominee, took out his frustrations by shooting Garfield. The president would later die of his wounds on September 19th. 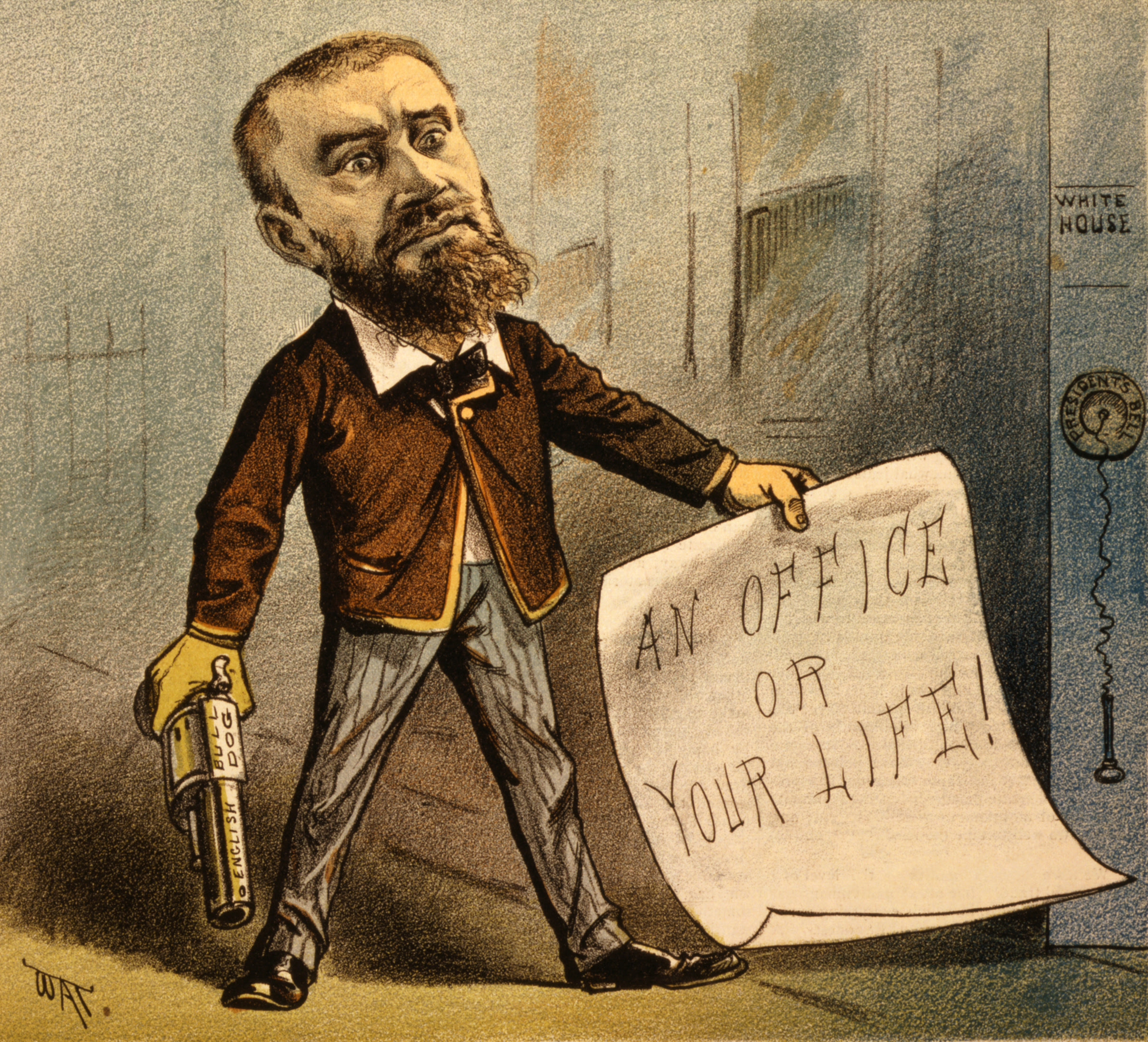 Before being featured in the musical Assassins, Charlie inspired a folk song about his exploits:


On an unrelated note, today is also the 140th anniversary of the fall of Rome to the Italian Army.
Posted by Ben Nardolilli at 7:54 PM No comments: